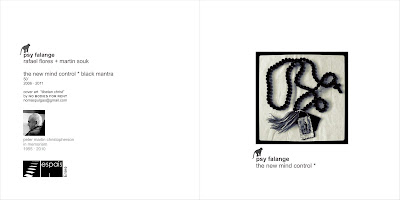 About "The New Mind Control"

In the spring of 2006, after an expedition to various countries of the East contacted with Rafael Flores, who had worked in the 80's under the name of Psy Falange, to offer a lot of field recordings that had been collecting along the journey.

When Raphael had them, I proposed to work together on these materials, which we did as a mere amusement over the next few months until a hypnotic piece that could not find any way to put an end, lasting over five hours.

Years later, in 2010, and commenting on the death of Peter Christopherson by both felt special admiration, we decided to restart the project as a posthumous tribute.

Versions were made of different durations, the edited courtesy of Espais NetLab is 50 minutes.