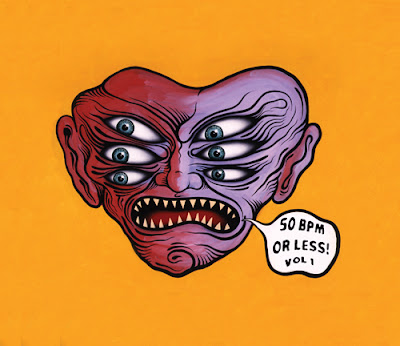 The first in a series compilation featuring noise that is of a slower than usual tempo released by Canned Beef Records.

This is compilation Part One or Three showcasing experimental noise tracks that were made or recorded at 50 BPM or less. Can noise be classified as even having BPM? Well, yes, I think it can. When I received these disc's I thought all the tracks would turn out ambient, simply because the music would seem slow at such a low speed. And for the most part I was right. There are a lot of different styles of noise though. We have the legendary Big City Orchestra with their prevalent style of musical ambient. Great opening track. Track two, done by Blood Vessel, is a beautiful ambient piece as well. Chimes, drones and soft tones. Track Six, done by TB, then changes things up a bit with a silly tune and beat. Not what I expected but I like it as it changes the pace a bit on this comp. Some tracks, like track nine done by Michael Biejer, are so subtle and quiet that I feel like just closing my eyes or reading a good book. The loudest and longest track on this comp is done by Xdugef. Full experimental range with circuit bent items and a lot of sounds hit your ears, but nothing too harsh. The closing track is something to marvel at, done by Susan Matthews; it's a beautiful piano piece that soon has soft scratching sounds fading in the background. Ever listen to Eno's "Music For Airports"? It's right up there. An excellent closing track and one of my favorite I've heard in a while, from anyone. Over this first volume is a fair showcase of some great slow pieces. Yes they are not loud but this disc is "musical noise to read to" for sure.
en 9:59 p. m.